Economic uncertainty brought by the Covid-19 pandemic will undoubtedly have a profound effect on the value of trust assets. Industry experts predict steep rises in insolvencies, affecting key industries. Many businesses may become cash-flow/balance sheet insolvent (if they are not already). Trustees of trusts with underlying companies running significant commercial enterprises may already find themselves experiencing insolvency events, rendering the top-level trust “insolvent”. As insolvency comes to the fore, trustees should be alive to the changes in their duties such insolvency events bring.

Insolvency in a trust context

Conceptually, “insolvent trusts” are a misnomer: a trust is not a separate legal entity and cannot, as a matter of law, be insolvent. When practitioners speak of “insolvent trusts”, they refer to trustees who have incurred liabilities (as trustees) exceeding the amount or value of the trust fund, or have incurred liabilities which they are unable to meet out of liquid trust assets as they arise. Although the test for “insolvency” in this context has not been considered in England, the Jersey court has applied the “cash-flow” test, e.g. whether the trustee can meet the liabilities incurred in that capacity out of the trust assets as they fall due.

How do the duties of trustees change on insolvency?

Fundamentally, trustees owe duties to exercise their powers in the best interests of the beneficiaries. But the interposition of a trust into credit or loan arrangements introduces something of an imbalance between the parties; the interests of significant creditors (who are not beneficiaries) to the trust are, in theory, not held to the same standard as those of beneficiaries.

The duties of trustees of insolvent trusts have been considered by Jersey and Guernsey authorities. Although they would not be binding on trustees outside of those jurisdictions, these provide useful, albeit conflicting, guidance. Taken as a whole, they suggest trustees and other parties (such as settlors with reserved powers) exercising fiduciary powers will need to consider the interests of creditors, and not just their trust beneficiaries, when exercising those powers. What is less clear is the extent to which the interests of the creditors should be given priority over those of the beneficiaries.

The position in Jersey

The Z Trust litigation in Jersey raised the question of in whose favour fiduciary powers should be exercised. In the case of In the Representation of the Z Trust [2015] JRC196C, the Royal Court considered the exercise of a third party’s fiduciary power to appoint new trustees, where the trust in question (the ZII Trust) was insolvent. Although the ZII Trust was not itself insolvent, the prospective trustee explained that the actual insolvency event in this case arose from another related trust’s inability to repay a significant inter-trust loan to the ZII Trust.

The court took the view that insolvency triggered a shift towards the interests of the creditors analogous to that seen in company law. A trust that becomes insolvent should be administered as if it were insolvent, with the trustees treating the creditors, rather than beneficiaries, as the persons with the economic interest in the trust. It concluded that once there is an insolvency or probable insolvency of a trust, “the trustee and all those holding fiduciary powers in relation to the trust can only exercise those powers in the interests of the creditors”.

As it transpired, the court found that the third party had not exercised the power to appoint in the interests of the creditors, but for the beneficiaries solely; the third party’s witness evidence explicitly stated that they had exercised their power to avoid an insolvency regime for another trust holding valuable family assets. Moreover, two significant creditors had not been able to consent to the appointment of the prospective trustees. The court considered that the third party holding the power to appoint owed duties to the class of creditors as a whole, and not just to a majority of those creditors (who otherwise agreed to appointing the prospective trustees).

The position in Guernsey

The Court of Appeal in Guernsey in the case of In Re: F 32/2013 considered, among other issues, two points arising from the first-instance decision by the Royal Court approving (or “blessing”) a decision by (at that point former) trustees of the F Trust (a Jersey law trust administered in Guernsey) to refinance a trust asset (a property in London) using trust funds, where that trust was insolvent. The two points were:

Neither the company owning the property on behalf of the F Trust, nor its parent company, were insolvent. However, they could not, individually or together, meet the refinancing costs. The former trustees’ application was to approve the use of other F Trust assets to pay those costs.

The Court of Appeal considered the fact a trust was insolvent did not mean the trustees ceased to have any powers to deal with the trust property, or that the court had no jurisdiction to supervise the exercise of those powers. It said: “The court nevertheless in principle has jurisdiction to bless an application of trust property that is not of benefit to creditors.” However, that did not mean the court could ride roughshod over the interests of creditors; in every case the court’s task was to consider the matter with regard to all of those interested in the trust property, i.e. including the beneficiaries.

In relation to the refinancing itself, its effect would be to preserve a trust asset for the benefit of anyone who turned out to be entitled to the assets. If the court was satisfied that the trustees had properly taken into account the interests of all those potentially interested, the court was in principle entitled to declare that the refinancing would be a proper exercise of the trustees’ power.

How should trustees proceed?

Trustees administering English proper-law trusts are faced with uncertainty on administering trusts which may be insolvent. After all, there are no decisions of the courts in England and Wales to guide them. Moreover, there appears to be a conflict between offshore cases concerning such trusts: on the one hand, the Jersey position (from a court of first instance) says trustees of insolvent, or probably insolvent, trusts owe duties solely to creditors; on the other hand, Guernsey authority (from its Court of Appeal) indicates that trustees could take steps which were not to the benefit of creditors, provided their interests have been considered.

What is clear, however, is that the interests of creditors should not be ignored in trusts which are suspected of being, or are already, insolvent. Prudent trustees should review the factual circumstances surrounding the trust’s financial position, and look to canvass both the views of creditors and beneficiaries. Where those interests are not aligned, the question of whose interests should be favoured appears to be more of a grey area. Consequently, we anticipate more litigation in this area. 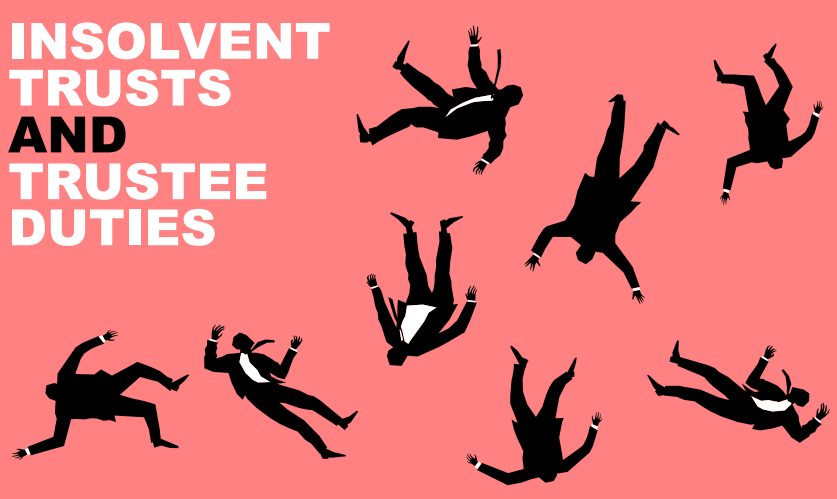