Relaxing Requirements for Executing a Will during Covid-19


The archaic nature of England's law on the execution of Wills has been called into question in recent years, but never more so than in the last couple of months with the outbreak of Covid-19. Embracing modern technology in Will writing has moved from being something that the industry felt it "should" do, to a more urgent plea to allow those that need to execute a Will now, to do so, safely and validly. Other countries have been more reactive introduced emergency legislation to deal with the situation, but so far, England has failed to do similarly. At present, it is therefore a case of working out what can be done within the confines of the legislation we have already.

The requirements are set out in the Victorian legislation of s.9 of the Wills Act 1837 and apply to Wills executed in England, Wales and Northern Ireland (but not Scotland). The section, provides that typically when the testator signs their Will their signature must be made in "in the presence of two or more witnesses present at the same time."  The key problem in the current circumstances therefore concerns the witnessing of the Will and the requirement for the witnesses to be "present".

The problems with witnessing

The need for the witnesses to be "present" with the testator can clearly not be respected easily with the current social distancing rules; even more so where a testator needs to self-isolate. All of this comes at a time when the demand for Wills has surged as people rush to get their affairs in order in the event that they fall ill.

The physical act of witnessing is one problem, but finding an appropriate person to do so is another. The witness cannot be a beneficiary under the Will without causing their gift in the Will to fail, and whilst there are no statutory provisions to prevent family members from witnessing, this is never recommended for risk that it could invalidate the Will, for example on grounds of undue influence. Where a testator is in a hospital, care home or hospice, visitors are currently heavily restricted and staff are often prevented from witnessing Wills for policy reasons, making the situation even harder.

The problem with this method is that, under current legislation, it does not satisfy the requirement for "presence". Case-law has highlighted that the word means "physical presence". A test case would be needed to determine whether it can stretch to "virtual presence".

The alternative to using remote witnessing is to have the testator and witnesses sign the Will in the same setting but respecting social distancing rules. The case-law on witnessing a Will provides some flexibility that can be taken advantage of in these circumstances. In Brown v Skirrow (1902), the judge ruled that the witnesses must be "visually present" and have a clear line of sight to the testator, but this does not necessarily mean that they need to be standing next to one another. The court found in Casson v Dade (1781), that a Will can be witnessed through a window.

The approach in other jurisdictions

The Law Society of Scotland has implemented a slightly different approach and has temporarily amended its guidance to allow the testator's lawyer to act as the witness via video-link, so long as they are not the appointed executor.

The approach in England

The issue of witnessing by video-link has been examined in England before. The Law Commission covered it in its consultation in 2017, concluding that as "presence" has been held to involve physical presence, witnessing via video-link would be invalid. The consultation also examined electronic signatures and recommended that these should not become a valid means of executing a Will until appropriate technological safeguards are in place.

The government has so far been reluctant to go against such recommendations or to introduce measures to allow for "privileged Wills" such as those that were permitted during wartime to enable military serviceman to draw up valid Wills whilst serving in the trenches.

The government is currently considering video witnessing but emphasised the need for any changes to be balanced against the important need to safeguard the elderly and vulnerable from potential undue influence and fraud. What then, are the options?

The best option, where possible, is to have a Will witnessed by those who are physically present but respecting the social distancing rules. Witnessing neighbours signing on the other side of a window for example, or across the garden fence, provided there is a clear line of sight to the testator's signature.

Where this is not possible, remote witnessing could be considered but the testator should be made aware of the risks. The video-conference should be recorded, and where possible, the Will re-executed when normality resumes. Where a solicitor is involved, there is the obvious need for careful file notes and evidence to document the circumstances and the advice given.

The testator could sign an informal letter of wishes with their testamentary requests. This will obviously not be legally binding but it may be possible for the inheriting family members under the intestacy rules to carry out the wishes via post-death gifts to the intended beneficiaries.

Although the government is considering the issues, there is a real risk that they will miss the boat and, with the peak of the epidemic now reportedly past, those that wanted to execute Wills may well already have done so, validly or not. Sadly, we are likely to see an increase in contentious probate cases surrounding execution in the coming months, and if the government has in the interim failed to act to change the law, it is possible that a resulting test case may finally prompt the government to update a law that so many are now urgently requesting. 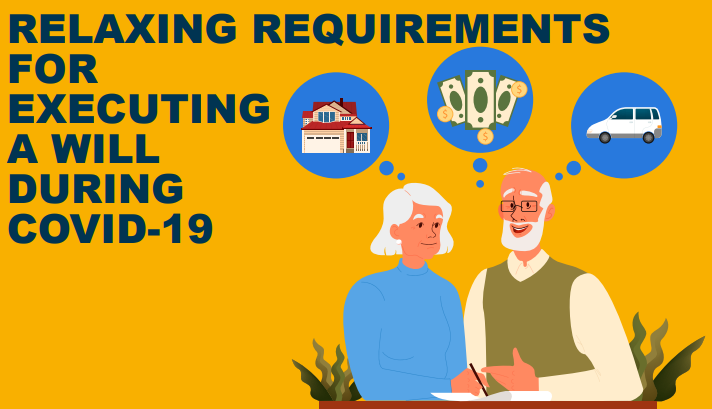