In England and Wales, we are free to leave our estates to whomever we choose. This is the principle of testamentary freedom, and it is a principle the Court is keen to uphold. Whilst we have this freedom in England and Wales, we also have the Inheritance (Provision for Family and Dependants) Act 1975 ('the 1975 Act'). A statute that was implemented to protect and provide for those individuals where it would be unjust for them not to receive financial provision from the deceased's estate.

It is possible for an adult child to bring a claim under the 1975 Act and seek financial provision towards items including their accommodation needs and day to day living costs. When considering a claim, the Court will carry out a balancing act of several different factors set out in the 1975 Act including:

Simply saying that a parent has an ongoing obligation to their child is not enough to demonstrate that it was unreasonable for the parent to exclude their child from their will. Although the concept of "fairness" carries little weight, the Court does recognise when a 'moral claim' arises. The moral claim is not a requisite component for a claim. However, recent case law has shown it to be a crucial element to a successful claim in those cases where an adult child can support themselves independently and is not in dire financial need.

The concept of a 'moral claim' arose in the case of Re Coventry [1980] where the applicant was the adult son of the deceased. The Court of Appeal held that it was not enough for an applicant to simply show financial need. The applicant was required to demonstrate something more to persuade the Court that it was unreasonable that greater provision was not made for them in their parent's will. This concept is particularly important in claims where the adult child is independent, capable of supporting themselves financially and of working age.

There are examples of cases by adult child applicants who were not in desperate financial need but were able to bolster their claim by advancing a moral claim. For example, in the Supreme Court case of Ilott v The Blue Cross and others [2017], Heather Ilott was awarded £50,000 from her estranged mother's estate. Heather had lived independently from her mother for several years, albeit she was dependant on benefits. Her mother had disapproved of Heather's decision to leave home at a young age to move in with her partner. She subsequently excluded her daughter from her will, preferring to leave her estate to charity. The Court was persuaded that Heather's estrangement from her mother was due to her mother's unreasonable behaviour. The reasons for the estrangement were an important factor in persuading the Court to make an award. If it was not for this factor, it is unlikely that Heather would have received an award.

The issue of estrangement was considered again in Nahajec v Fowle [2017]. The applicant was young with several working years ahead of her. She was estranged from her father at the time of his death, having attempted to reconcile with him numerous times. The Court considered the evidence in the round and found the deceased to be stubborn, which was the reason for their estranged relationship. The applicant was awarded a sum of £30,000 to enable her to complete veterinary nursing qualifications. This demonstrates that a capable applicant can still receive an award. The Court's approach in this case shows that where financial need is not a strong enough factor in itself, a 'moral claim' can result in an award being made.

In contrast, Lady Tara Wellesley's claim against her estranged father's estate, the 7th Earl of Cowley was dismissed in 2019. The Court found that she was able to live independently and within her own means. The Court gave more weight to the deceased's testamentary wishes given that the estrangement was as a result of Lady Tara's bohemian lifestyle, indulging in drink and drugs.

Re Seviour [2020] is a recent claim brought by a financially stable daughter (albeit with some credit card debt) against her father's modest estate which had been left to her terminally ill step-mother. Deputy Master Lloyd robustly dismissed the claim saying in his judgment 'as the argument wore on it became clear that [the applicant] was motivated by the view that she was entitled as of right to one quarter of her father's estate. She clearly is not. The will is quite clear...' On the facts of this case, the applicant was unable to demonstrate financial need or a reason why it would be unconscionable for her father to exclude her from her will in line with the criteria set out in the 1975 Act. It is important to remember that this steely dismissal of a 1975 Act claim by an adult child will not automatically translate to any claim by an adult child, as each case turns on the facts.

It is clear from recent case law that claims by adult children should not be easily dismissed, as perhaps they once were historically. Estrangement and the reasons for estrangement has become a key factor in considering some/many claims. Recent research (Ipsos MORI, 2020) has shown that one in five families are affected by estrangement. One may expect an increase in 1975 Act claims by adult children given the Court clearly considers the reasons for estrangement in determining the obligations and responsibilities of a parent to the child.

However, each case much be carefully considered on the facts. A moral claim is not a box that must be ticked. Rather, it appears to strengthen claims where otherwise the applicant's claim may not have been strong due to their financial independence or ability to make their own way in the world. It is natural to consider the morality of a will exclusion on a subjective footing. We all have own perceptions of what we think is right and wrong.  However, the Court must consider these claims objectively and consider whether the deceased has made reasonable financial provision in their will for their adult child in all the circumstances and facts of the case. The Court must navigate the moral maze carefully.  Despite recent unsuccessful cases by adult children, I anticipate that adult child claims are here to stay. 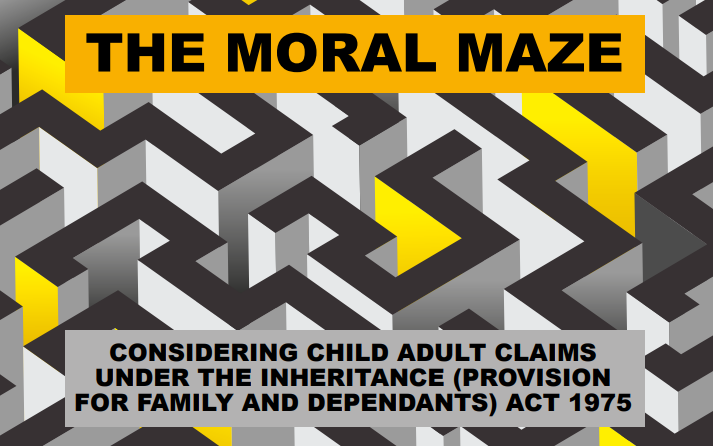